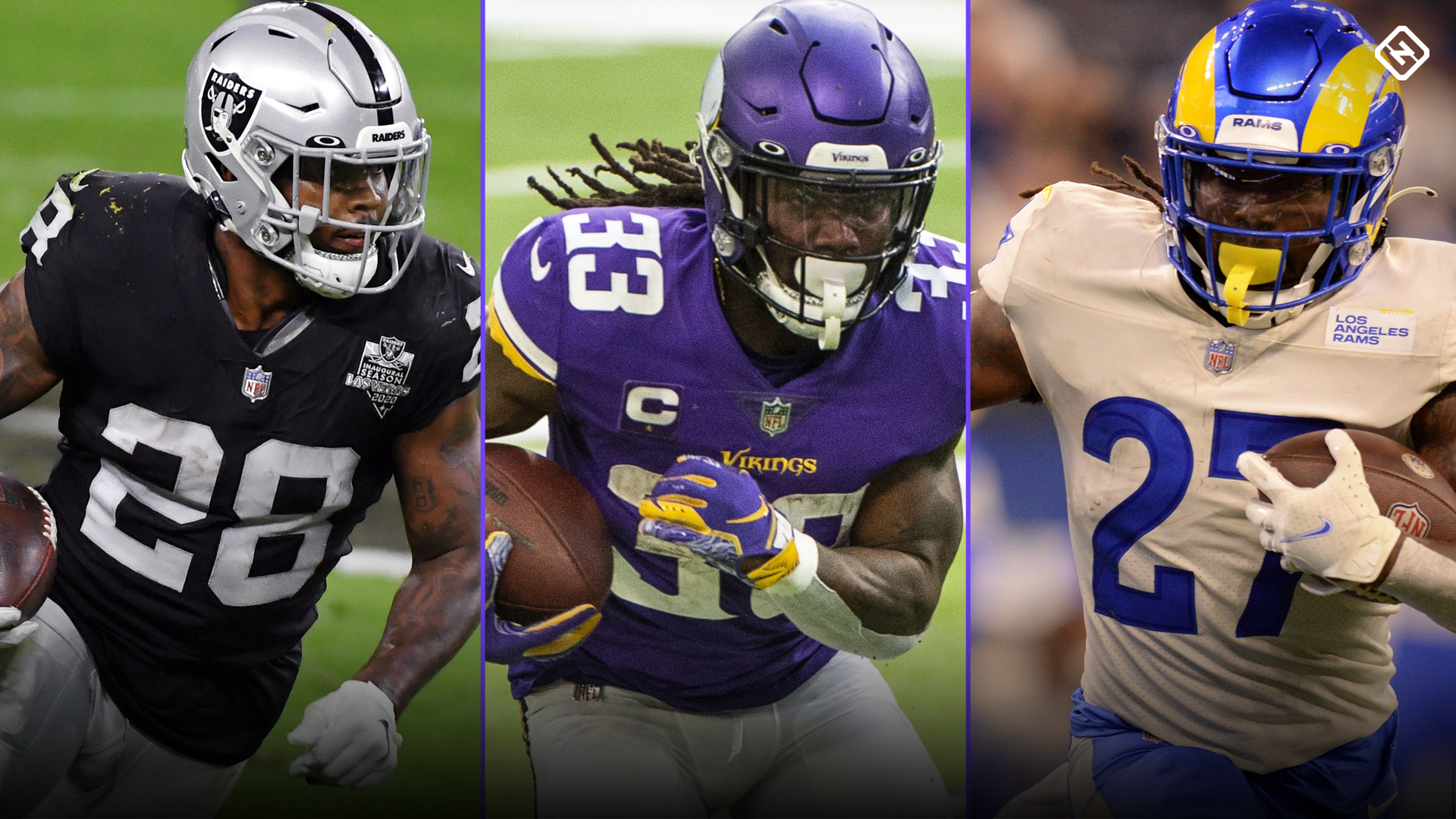 Running backs Josh Jacobs, Dalvin Cook. Darrell Henderson, and Elijah Mitchell figure to be "questionable" heading into their Week 4 matchups. Some of them are in better spots than others, but any of them being ruled out will affect Week 4 fantasy RB rankings and start 'em, sit 'em decisions. We have the latest news on each player and which handcuff RBs will benefit from their absences. As always, these are fluid situations, so check back for updates.

For all the latest fantasy updates, follow us on Twitter @SN_Fantasy. For news on injured WR teammates from the Steelers, Giants, and Titans, click here; for the latest on Lamar Jackson, go here; for updates on ailing pass-catchers Rob Gronkowski, George Kittle, DeAndre Hopkins, and Antonio Brown, go here.

UPDATE: Jacobs participated in practice Thursday -- a good sign for his Week 4 prospects.

Jacobs (ankle, toe) doesn't play until Monday night, so his status will leave us on the edge of our seats. He's likely going to be listed as "questionable" heading into the matchup with the Chargers, but we may not know if he'll play until just before kickoff. Raiders coach Jon Gruden has been hopeful Jacobs would be back this week, but we don't have a ton of information since Vegas' practice schedule is moved back a day.

There's a chance Vegas will give him another week of rest with Peyton Barber having success against Miami. Barber eclipsed 20 touches and 100 rushing yards, and the Raiders have gone out of their way to express belief in him.

If Jacobs suits up, we have him as our No. 18 RB in standard and No. 23 RB in PPR against a Chargers' team that has given up the 11th-most fantasy points to running backs. Barber is a flex consideration if he can't go. Make sure to put Jacobs in your flex spot if there is no ruling on his status by the time Sunday's games begin. That way you'll have more flexibility if he's inactive.

Cook was a limited participant in Wednesday's practice, and although it's just speculation, he's trending toward being able to play (vs Cleveland). This feels like an "all or nothing" situation. If he's active we should expect a full workload. Mike Zimmer doesn't seem like he'll hold him back based on his comments last week. Cook was very close to playing last week, so we have a hunch he'll play this week. Alexander Mattison was terrific in his absence, getting 32 touches for 171 total yards. He's a great RB2 option if Cook does miss the game.

For now, we're setting our rankings as if Cook is going to go, and we'll adjust accordingly if he's ruled out really in the week. He's our RB3 in PPR leagues and in standard leagues for Week 4.

Henderson (ribs) took the practice field Wednesday, and he is trending toward returning for the Rams' Week 4 game against Arizona. It's tough to know what his workload will be when he returns, as Sony Michel will likely eat into more and more of his touches as he gets more familiar with Sean McVay's offense. That said, it's tough to love either of those backs against Arizona. We expect this game to be an air-raid shootout, so there may be little work on the ground. Still, Henderson warrants flex consideration depending on your other options.

That said, we ranked Henderson as the RB27 in standard leagues and RB34 in PPR for Week 4.

Mitchell (shoulder) was also a limited participant in practice Wednesday. Trey Sermon failed to impress in his chance to be the 49ers lead dog in the backfield, so it's not wrong to expect Mitchell to be the primary back as soon as he returns. He's trending toward playing, but we'll have to stay tuned for this one. The 49er's like to keep things close to the vest, so we may have to wait until game time. The 49ers take on Seattle in Week 4, who have given up the most fantasy points to RBs this season. Yes, they got steamrolled by Derrick Henry, but Jonathon Taylor/Nyheim Hines and Alexander Mattison also had nice games against them. Mitchell is in a good spot if he can suit up.

Mitchell is our RB19 in standard and RB22 in PPR leagues for Week 4. If Sermon is getting the start, he'll likely be ranked a little bit below Mitchell is now based on what we've seen so far.