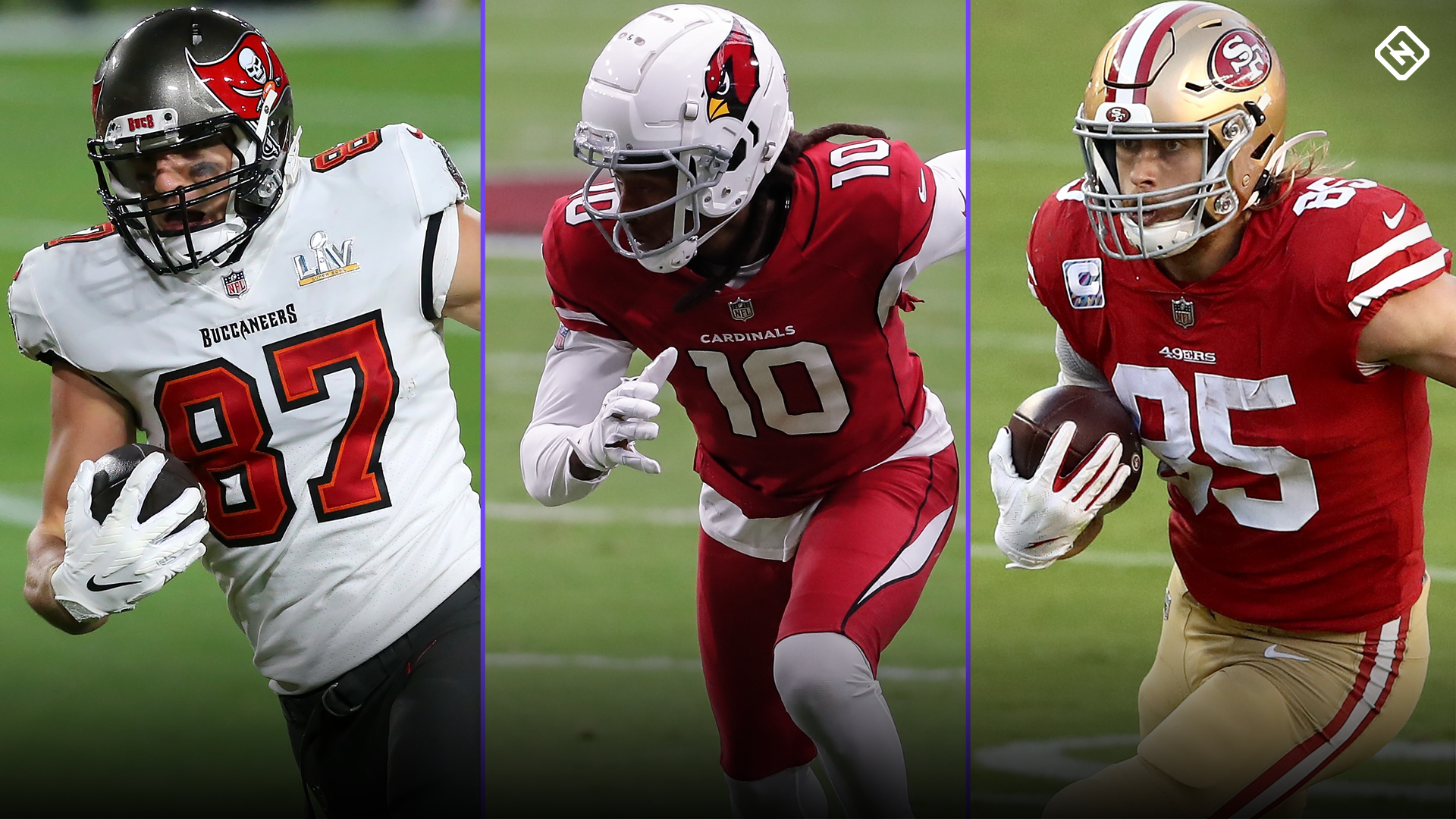 Pass-catchers Rob Gronkowski, DeAndre Hopkins, and George Kittle have already missed practices this week and could be "questionable" for Week 4. They're all regularly inside the top-five players at their positions in fantasy, so their statuses will undoubtedly affect Week 4 fantasy rankings and start-or-sit decisions. Antonio Brown missed last week with COVID-19 and might be up in the air, too. Our health and injury updates provide the latest news on each guy and who would benefit in fantasy if they are absent. As always, check back regularly, as we'll update this post with the freshest information from practice reports.

For all the latest fantasy updates, follow us on Twitter @SN_Fantasy. For updates on banged-up RBs Dalvin Cook, Josh Jacobs, Darrell Henderson, and Elijah Mitchell, click here; for news on injured WR teammates from the Steelers, Giants, and Titans, click here; for the latest on Lamar Jackson, go here.

UPDATE: Gronk was once again not a participant in Thursday's practice. Still, he seems to be on track to play, but this is worrisome as we approach Sunday.

Gronkowski took a brutal hit to the ribs last week against the Rams, but his X-Rays revealed no fractures or serious damage. He returned to the game after the hit and is expected to play against his former team in New England. He did miss Wednesday's practice, but that has been pretty standard for him later in his career.

The Patriots have been the second-best team against tight ends this year, but they haven't played against any real threats at the position. It is worth noting they held Mike Gesicki to zero receptions, but Gronk is a different animal, especially in this "revenge game."

We rank him as the TE5 in standard and in PPR leagues. He's been the TE2 so far this season, so while we are bumping him down a little bit with the tough matchup, this is about as far as he can fall.

UPDATE: Hopkins took the practice field Thursday, so there is a more positive note for his Week 4 outlook and availability.

Hopkins (ribs) was out of practice Wednesday and will likely carry a 'Q' tag into Sunday's game with the Rams. There's not a strong indication as to whether he'll play, but we'll continue to update this post as news comes in. He played last week despite being missing practice all week, but he caught just three passes for 21 yards. We know that's an uncharacteristic game for Hopkins, but there's a chance we see more of the same this week. He's already dealing with his rib injury, and he'll likely draw Jalen Ramsey shadow coverage -- not an ideal recipe for fantasy success.

This game could be a shootout, so Christian Kirk, Rondale Moore, and even A.J. Green look attractive -- even more so if Hopkins is out.

That said, his talent keeps him within the top-20 WRs, but we rank him as the WR18 in standard and PPR leagues. His range of outcomes is enormous, and he could finish anywhere from the top five to outside of the top 36. Still, there's no way you can reasonably bench him if he's active.

UPDATE: Kittle was out of practice Thursday, and his chances to play are starting to seem more doubtful. We still don't know for sure, but continue to monitor this moving forward.

Kittle missed Wednesday's practice because of a calf injury, but 49ers head coach Kyle Shanahan isn't worried about Kittle's Week 4 availability (vs. Seattle). If he's not concerned, then we shouldn't be either. Kittle has been somewhat disappointing so far this year, as he's been outside the top-five TEs in fantasy points. With Kittle, you're always expecting a top three placement among tight ends. However, he has a good chance to have a "get-right" game against a terrible Seahawks defense that was just shredded by Tyler Conklin (seven catches, 70 yards, touchdown).

If there are any setbacks here, it is worth noting Ross Dwelley will be the lead tight end for San Francisco. We saw Jordan Reed be productive when Kittle was inactive last year, and they'd still like to feature a tight end in their offense. For Week 4, we have Kittle ranked as the TE4 in standard and PPR leagues.

Brown is expected to rejoin the Buccaneers on Thursday after testing positive for COVID-19 last week, which caused him to miss the game against the Rams. There's not much to say here other than Brown is once again a solid flex option despite the tough matchup with New England. This offense is good enough to produce against any defense.

Brown is our WR30 in standard and WR32 in PPR leagues for Week 4.